Over the past few days, I’ve been implementing a single-scattering volumetric fog effect in hikari, my OpenGL PBR renderer.

I started by more-or-less copying Alexandre Pestana’s implementation (http://www.alexandre-pestana.com/volumetric-lights/), porting it to GLSL and fitting it into my existing render pipeline.

However, there’s an issue: by not taking into account the transmittance along the ray, instead taking an average of all scattered samples, the effect is far more severe than it should be. In addition, it blends really poorly with the scene (using additive blending after the lighting pass.)

Bart Wronski describes a more physically-correct model in his presentation on AC4’s volumetric fog (https://bartwronski.com/publications/). I did not go the full route of using a voxel grid (although I may in the future; this renderer uses clustered shading so that’s a natural extension). However, Wronski presents the correct integration to account for transmittance, and we can apply that to the post-effect approach as well.

Background out of the way, I wanted an implementation that was:
– Minimally invasive. If possible, as simple as adding a new render pass and blend. No compute shaders or large data structures.
– Tweakable. Light dust to thick fog.
– Plausible. I don’t need absolute physical accuracy, but something that fits well in the scene and looks “right”.

The core loop is (relatively) simple:

The raymarch operates in view space. This was mostly a matter of convenience, but also means we maintain better precision close to the camera, even if we happen to be far away from the world origin.

Currently, I only compute scattering for sunlight and a constant ambient term. (Coming from directly up.) If you have ambient probes stored as spherical harmonics, you can compute a much better ambient term — see Wronski’s slides for details. Other light types require recomputing the scatter amount per-sample, as it depends on the angle between the light and view.

Note the scaling by transmittance. The light scattered by a sample has to travel through all of the particles we’ve seen to this point, and therefore it is attenuated by the scattering and absorption.

Density is (very roughly) a measure of particle density per unit length. (I don’t 100% understand the physical basis here, but it is dependent on both particle size and number.) The implementation currently uses a completely uniform value for density, but this could easily be sampled from a texture map (artist painted, noise, particle system, etc.) In practice, good-looking density values tend to be very low: 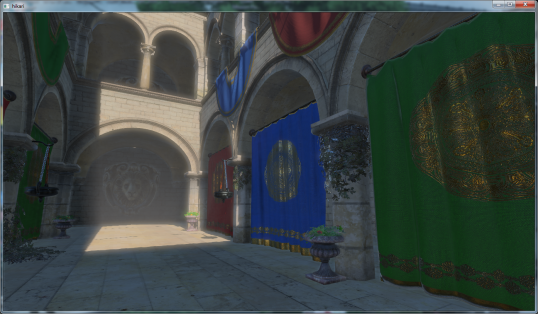 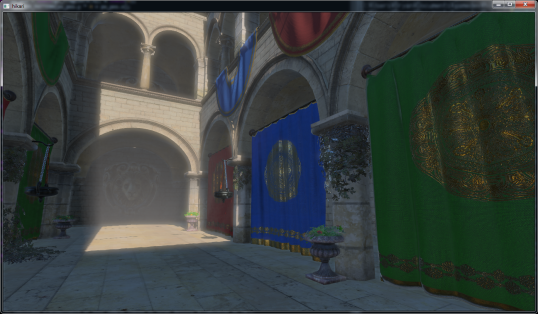 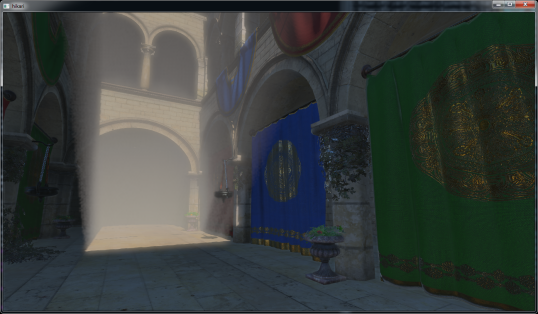 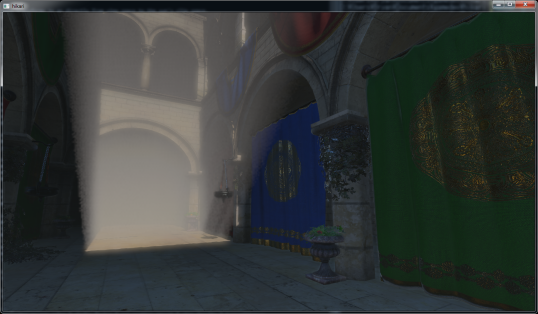 You can smooth the results of higher densities by using more samples (or blurring the result.)

The other control parameter for the scattering is g. This is used in the phase function to compute the amount of light scattered towards the viewer. The valid range for g is [-1, 1]. In general, most atmospheric particles will have a negative g value, that increases in magnitude as the particle size increases. Some good values to start with are between -0.75 and -0.99. 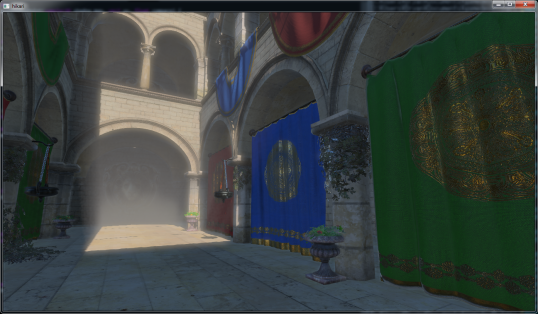 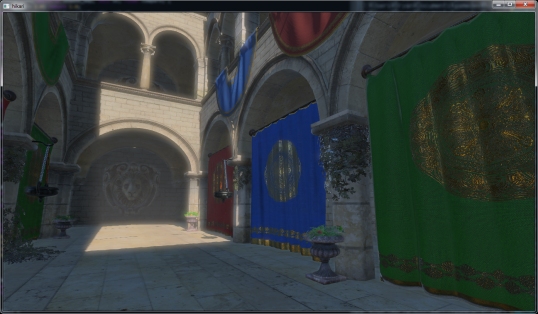 At low sample counts, the result is highly susceptible to banding artifacts. To combat this, we jitter the starting position by moving some fraction of a step in the direction of the ray. (This is the same approach used by Pestana.) In order to keep the noise unobjectionable, we need to use either an even pattern like a Bayer matrix, or blue noise. I’ve also experimented with dithering the step distance as well, such that neighboring pixels use different step sizes. However, this does not seem to produce much benefit over just jittering the start position; the resulting noise is more noticeable. 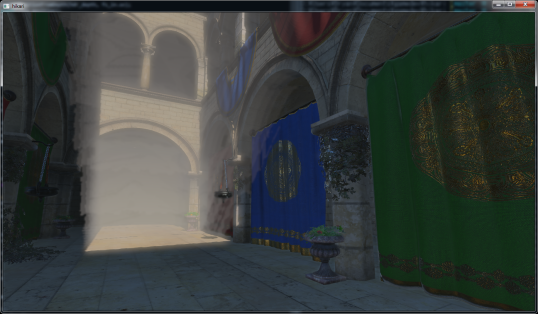 The outputs of this shader are the accumulated scattered light (in RGB) and the final transmittance amount (in alpha). I then perform a bilateral upscale (directly ported from Pestana’s HLSL version) and blend it with the lighting buffer using glBlendFunc(GL_ONE, GL_SRC_ALPHA). The transmittance is the amount of light that reaches the viewer from the far end of the ray, so this is accurate.

For higher densities or more uniform scattering (g closer to 0), we may want to perform a depth-aware blur on the scatter buffer before upscaling. Since I didn’t have an immediate need for really thick scatter, I have not implemented this yet.

The scattering should be added before doing the luminance calculation and bloom. This helps to (somewhat) mitigate the darkening effect of unlit areas, as well as further smoothing the edges of light shafts.

There’s still a lot to be done here: supporting additional lights, variable density, etc. But even the basic implementation adds a lot when used subtly.